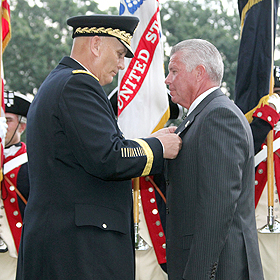 Bob Delaney served as one of the National Basketball Association’s most respected referees and in law enforcement was a highly decorated Trooper with the New Jersey State Police. His NBA career began in 1987 and he his officiating portfolio includes more than 1,700 regular season games, 160 playoff contests and 9 Finals. He worked the 1998 and 2011 All-Star Games, as well as the 1994 Opening NBA Games in Yokohama, Japan and 2010 China Games in Beijing and Guangzhou. He received the prestigious Gold Whistle Award from the National Association of Sports Officials in 2003.

For the past 30 years Delaney has provided training before Federal, State, County and Local law enforcement officers and agents throughout the United States, Canada and Europe. He has helped many to understand and identify symptoms of Post Traumatic Stress Disorder and the impact it has on the individual and the ripple effect to family and friends.